A radio was modified to provide the feed for the stream, this was one of my Binatone EK1000 radios, it's antenna was removed, and the antenna housing cut off with a hacksaw blade to accommodate direct connection to the antenna, the centre of the coax cable connected to the hole made vacant by removal of the extremely small and inefficient coil antenna, and the braid of the coax cable to a ground pad next to the antenna hole.  The speaker leads were disconnected and connection to the computer is provided by the cable from a broken pair of headphones, to wire these up I had to break out the sandpaper and remove the coloured enamel from the wires to allow them to be soldered to the speaker terminals.

The antenna is a home made dipole, the making of which appeared to kill my glue gun but fortunately it was cheap, this is held up on the window with blu-tack, the idea of it is to help receive what the gateway does, so if for example I am out and about with a radio, the stream radio and the gateway should pick it up at the same time

Below are photos of the equipment 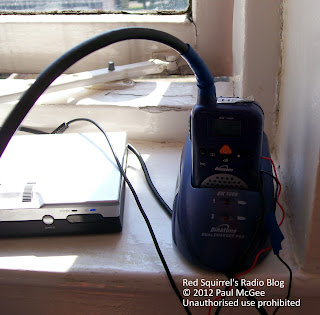 The home made dipole antenna mounted to the window

The stream is available at http://richmond446frngateway.listen2myradio.com/ and  is in operation near enough 24/7, you can also listen live on the move with your mobile phone, if you have an Android phone or tablet just install Winamp, tap on the "SHOUTcast" button, then tap on the "Enter Station Manually" link, then enter "http://217.147.86.116:9932" (this works for Winamp for the PC also), as the stream is not listed in the SHOUTcast directory, it doesn't appear possible to listen via the SHOUTcast app for iOS, but I am working on this one.

Everything that is heard is what is heard by radio users of the gateway in Richmond.  This is what you will hear on your own PMR446 (or Chinese UHF handheld or modified 70cm Amateur radio should you use those on PMR446) when you are in range.