Ambitious plans and how they could involve radio

I have some ambitious plans for the future if I can get enough people on board with the project, what that project is I won't be revealing just yet but radio, and operating portable, does come into it.

The idea is to include a 2/70 setup and HF, as well as an 11-meter setup in the design, and of course other niceties that I can include so I can have a comfy seat and a cup of tea at my operating position.

Initial designs are being worked on as I speak and antenna positions thought of as well, and a list of people I could get on board, both Amateur and non-Amateur (as this does involve a bit more than radio) are being drawn up, as I've not embarked on any kind of big project before this is something I'd like to do and hope to begin as soon as it is realistic to do so.

DV hotspot update 5 - should be the final one

So the Jumbospot arrived yesterday, I filmed the build in parts which will be on YouTube by Monday all being well.

The assembly was pretty straight forward, the board was supplied with 2 sets of header pins for the Raspberry Pi Zero W, an SMA female antenna jack, the antenna itself, an OLED display and a set of screws and spacers, completing it a black anodised case with cutouts for all the Pi's connectors and the Jumbospot board's LEDs, antenna jack and OLED display.

The configuration in Pi-Star was the head scratching part, though once this was worked out I moved on to testing tx/rx, initially nothing but with some tweaking in Pi-Star it worked fine.

The next test I did was run the Jumbospot off a battery, namely a Goodmans 8000mAh powerbank from B&M, running from about 3:40PM to about 2AM the next morning and the powerbank only went down by one of the white LED indicators on it, the setup being very power efficient and thus can be used anywhere it can get on the Internet, I simply tether it to my phone and it does the job as long as coverage exists in the area I operate from.

Now I have it I should be able to make DMR and Fusion contacts, I mainly can be found in CQ-UK but could be on other reflectors and talk groups.

Activate All Counties: 4 years of legal SSB CB radio, the logs are out

The logs of each net that took place on 27th June are now out on the Charlie Tango DX website (link here), the event was a huge success and I am so glad that I was able to take part even if I had to use a radio other than that that was intended (which if you read was down to reverse polarity resulting in a blown fuse), the T2LT performed and got the signals in and out and got the job done, and for the first time since its issue my CT call is now in a log.

The event proves something very notable, CB is not dead, and if you don't fancy taking the Amateur radio exam immediately it is a great way to enter the radio hobby, AM and SSB are permitted on the midblock, all current CB radios on the market can do at least AM on the midblock if set correctly, and some can do SSB though these attract a slightly higher price, with the right conditions you can work stations as far away as America all without the formalities of a license, however CB is restricted to 12 watts PEP on SSB and 4 watts ERP on AM and FM.

I don't operate 11-meters often and this is the first time I've had any success in some years with it given conditions have been terrible, just a shame that it didn't get to YouTube but on the day I had some wonderful scenery to look at and a very famous pub across the road should I have fancied a (non-alcoholic) drink, though I was content with the water I had in the car.

Get yourself a CB radio, a fibreglass mast, some batteries, and watch Gary CTX104's video on YouTube for how to make a cheap portable T2LT antenna, then go up to a hill and start working those stations, it will be worth it and will give you a sense of satisfaction, then when you want to go further the Amateur radio licence awaits.

The MMDVM jumbospot board has been marked as of the 1st July (surprisingly) as having left Hong Kong, so it should arrive at some stage this week or very early next week all being well, in the mean time I've subject the Raspberry Pi Zero W that the hotspot will be based on to a run-in test, that is I have left it powered up for a few days, though I know a Pi Zero can run for in excess of 100 days, as in the case of my much older one I use for my IRC bouncer, the Zero W is a slightly different design and has extra (WiFi and Bluetooth) hardware on board, I usually do run-in tests that last about a week though it may be powered down sooner if the board arrives from China (well Hong Kong but it's technically still China).

If it does arrive within the week then I should have it up and configured (and a video to YouTube) in good time before the talk on System Fusion (and possibly) DMR in 2 weeks time and also have made my first official QSO on DMR, I have the radio I may as well get it used for its intended purpose, though it works exceptionally well in Analogue it is, fundamentally, a DMR HT, I've gone ahead and set up a Brandmeister Selfcare account should I need it, I don't believe I need to do any registration for DMR+ as my DMR ID should be enough, and nothing should be required for System Fusion other than hotspot configuration, and the only two digital voice modes I will use are System Fusion and DMR, as I own no D-STAR equipment (and have no intention of buying or using any until Chance Callahan KD0MXN has his Amateur radio licence revoked for his atrocious behaviour), and P25 and NXDN do not appear to be used by UK Amateurs.

The only real thing left to do is wait really, it shouldn't be long now.

The President Grant II lives on!

A miracle? no, simply a blown fuse, I put a lower value fuse (safer than a higher value) than the one already fitted as it was all I had into the Grant II's power lead, hooked it up to my jump starter and off it went, but first I had to do some digging to find out if it was indeed a very expensive paperweight (note that this is an original Grant II and not a premium but it was still near enough £200 when new).

This of course meant breaking out a screwdriver and removing both covers to examine the board, particularly around the power input area, I spotted a diode that I thought may have protected the radio but this did not explain the fact it was not powering up, so the fuse was examined after I did some digging on the Internet and low and behold it was blown, this was a very lucky escape as I somehow managed to reverse the polarity of the cables as I saw red on one which I thought to be positive, turned out what I saw was actually where the red attached to the black and thus resulted in the situation I found myself in on Wednesday

The radio was then powered with the fuse replaced as noted above (a lower rated fuse is safer than a higher rated fuse because a higher rated fuse is less likely to blow under fault conditions, a lower rated fuse does become a pain because it would be prone to blowing when you don't need it do), the display lit up fine, the memory channels were intact, nothing out of the ordinary, the radio covers were refitted and the speaker reconnected (the Grant II is like the TTI TCB-550 in having a speaker that is plugged onto the board rather than the wires soldered directly, wise choice by both President and Uniden), then the transmitter tests, first of was transmitter power, all within 3 to 4 watts into my salt water dummy load, 12 watts for SSB into the same load, audio was tested on AM and FM only with the receiver being my Midland Alan 42 Multi handheld, all good, receive audio was also tested, not a problem, this radio has had an extremely lucky escape, this has further spurred me on to invest in Anderson Powerpole connectors because those would prevent mishaps like this as they cannot be reversed and also the Fuser 6 unit from SOTABeams to add that extra layer of protection.

I am relieved and hope to get the Grant II on air again as soon as possible.

Also here are the pictures of the Grant II during the testing as well as the fuse how I found it, these are also available to view on my Twitter account. 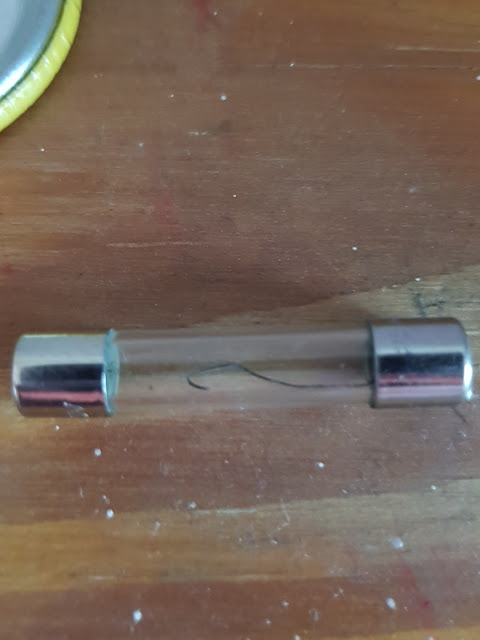 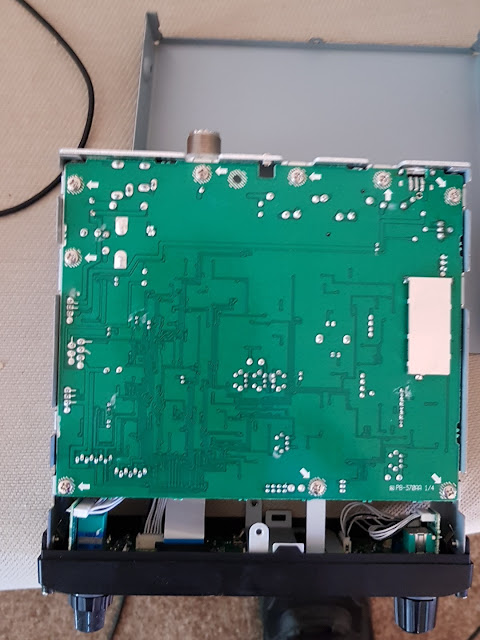 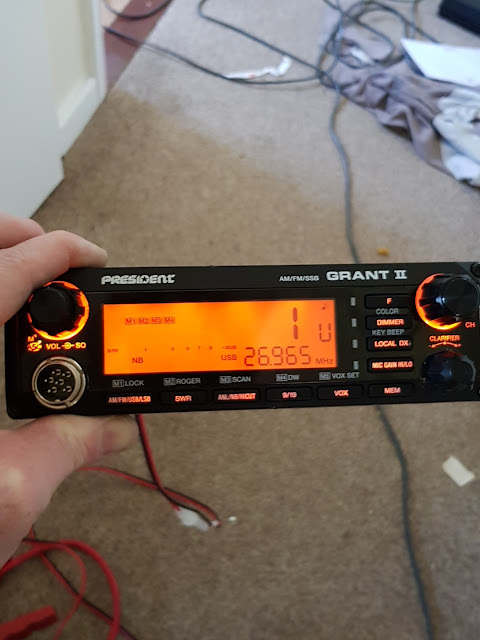 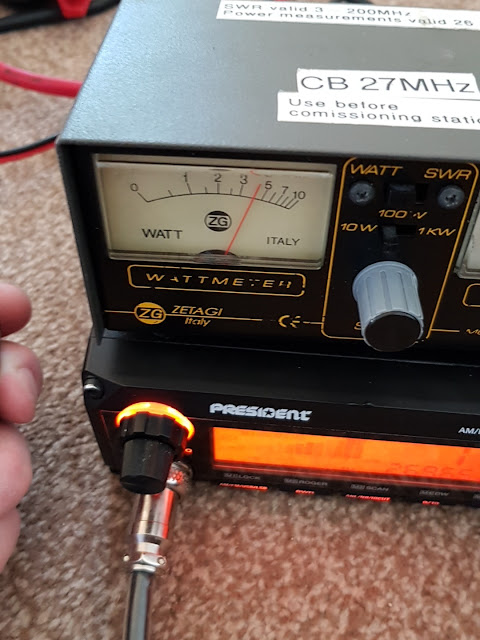 Remember, red to red, black to black or it will be blew to bits or in my case a blown fuse, well done to President and Uniden for including the diode in this radio, if that was not there I'd have a very expensive paperweight.

Chinese radio equipment for the amateur

I have had a little look on eBay just before posting this and just before I get on with some housework, I have found that China are offering radios, digital hotspots and TNCs primarily for APRS use, this is interesting, the radios were the start of it but as more and more Amateur radio related equipment is made and comes directly out of China it could flood the market with all this cheap gear, the quality depends of course as this is China but their radios lately have been up to standard, my Anytone AT-D868UV for instance, though Chinese and though I bought it from a British supplier, the quality is very good indeed.

I am of course still waiting for the hotspot hat, might show up by the end of this week but maybe next week, who knows, as shipping from China can take time, I last bought crimp on PL259s from China and these arrived fairly sharply, I've not had a mail delivery today anyway and I doubt the board will arrive today anyway.

Want cheap radio gear, get it from China (though be aware you could get stung by a customs charge though this has yet happened to me)