Adding some 'retro' to the shack

I love old tech, which is one reason why I enjoy radio so much as you can still get radios that are very old yet still work very well, and near enough all antenna designs are getting on a bit now and if it isn't broken why fix it?

So in my collection of random bits of electronics I had lying around I had a moving coil DC voltmeter that looks quite old, and works fine, all it needed was a resistor on the positive line (I used the resistor that was originally used on it retrieved from the wiring loom of the equipment I'd salvaged it from, which I measured at about 30k), two wires, and the meter readjusting to read zero when no voltage was applied, I then promptly wired this into my Maplin 13.8V DC 7A power supply and it read about 13.8V (which tallies with my multimeter), the meter will find a new home when I custom build a new supply for the radios, as the 7A supplied by the Maplin supply is not adequate for some of my higher power radios, such as my CRT SS9900, which is capable of 50 watt transmit, though interestingly when I tested the K-po EA35 linear this was well within spec of the power supply though I have not tested current draw fully as yet.

The idea is that I build this meter into the housing of the new power supply because it's so retro, it mounts using a couple of threaded studs on the back so hole cutting into panels is not an issue, and when I go to the next rally I go to I'm going to look for some of these as well as ammeter versions because they have this retro charm, so when this new custom supply is built I can see how much current is being pulled as well as what the output voltage is.

I even took a photograph of it on the operating power supply, the supply is a big heavy linear one, which I have owned for years initially for CB use, then it got used for my VV898 and then my KT-8900D, the latter being a 25 watt radio and does not draw a lot of current despite this high transmission power, wondering how they've done that. 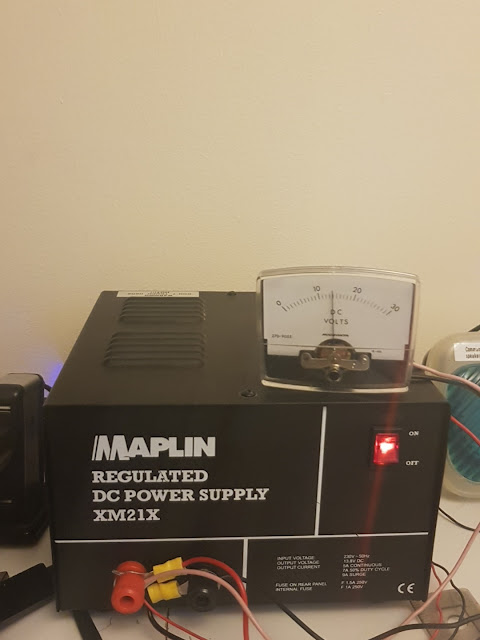 The reason the wire to positive is pink and not red is because this was the wire the resistor was already soldered to, I used a black wire for negative to make it pretty clear how this wired up as the meter is polarised, and wiring it in reverse would cause the needle to go the opposite way and potentially break the meter, and it looks the part with the power supply, sadly though Maplin went out of business last year and the XM21X bench power supply can only be had second hand, however regulated supplies like that aren't popular anymore due to modern switch mode supplies being much cleaner from an RF standpoint due to much better filtering than older designs, and their output currents significantly better and of course switch mode supplies are small and lightweight.

This supply currently drives the blue LEDs inside my homebrew extension speaker and the KT-8900D, and gets occasional use for CB testing as I don't go on 11-meters from home, however I am working to solve that issue in a stealth manner, hopefully it will be solved soon.

These moving coil meters can be picked up at radio rallies and also if you look on eBay you'll often find them, sure digital displays can be a bit more accurate but they just don't have that cool factor.