A bit of a snag

I have measured the boot appropriately for the radio installation to take place, it looks like I am all set to commence the installation however a potential snag has been thrown up, and this relates to the gap in which I would have liked to run at least the coax through to get it to the boot. 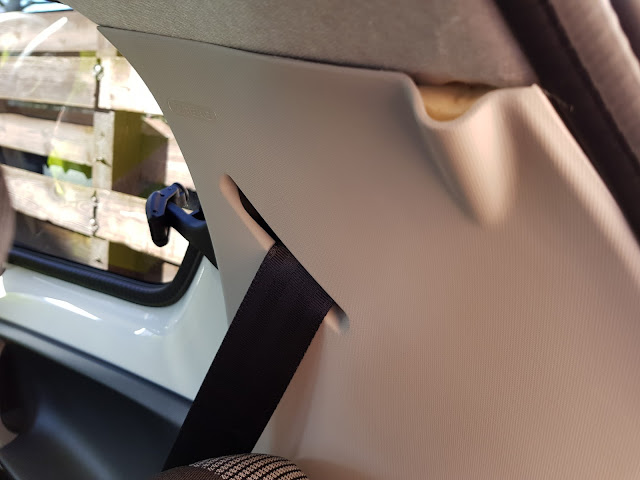 In this first picture you can see the gap I intend, or at least intended, to use, however you may notice something next to the rear passenger door that has indeed put a spanner in the works here, and it goees back to the same scenario I had relating to removal (or inability to remove) the A pilar trim 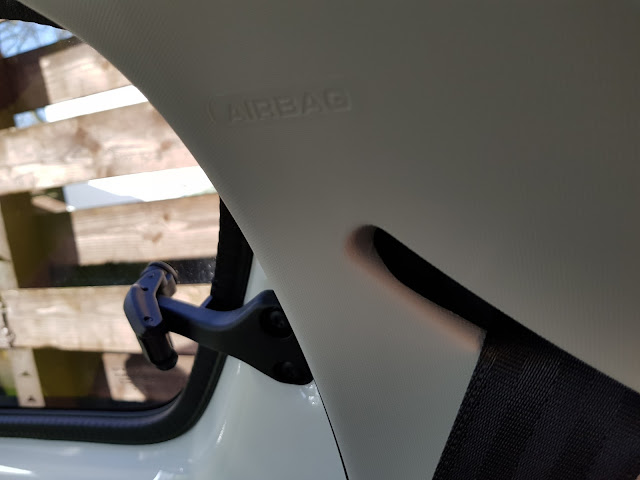 Yes, that you can see there is the word "Airbag", this means I cannot run the coax behind that panel as I would have liked to as I do not know how close that gap is to the airbag, there is one on the other side as well however the wiring running through it is for the rear demister and the wiper motor, so it could still be some distance from the airbag, as it is well known airbags do deploy with considerable force and the risk of this is not something I would feel comfortable in taking for the benefits of myself and my passengers at any given time, however with the measurements I have taken the FTM-400 will still be located in the boot.

While I was down there I had the stereo out (on the AB10 Aygo (as well as its inferior Peugeot and Citroen siblings) this is a case of removing the blower control knob and unscrewing a screw and using patience and care to pull the panel holding the stereo, along with the hazard switch, rear demist switch and A/C switch if fitted out of the dashboard), I did this so as to install my virtual CD changer box (as the stereo is identical to my previous car), this told me that the wiring to the stereo was, to my surprise, ISO (so an ISO to ISO jumper can be installed for the power relay to tap off the +12v switched line and the ground) rather than the expected Fakra to ISO adaptor given that many of these later cars came with a Bluetooth stereo as an option that uses Fakra connectors, I did spot a pair of extra relays and an unused connector behind there that were not present on my previous car, I figured the relays must be related to the front fog lights (and perhaps the running lights though these don't power on until the engine is running), the unused connector I have not ascertained what it may be for and don't intend to touch it, this does not mean there is no room for my power control relay (which is a Bosch type relay for all intents and purposes), so a search for ISO male to female jumper for the power side only is in order.

I have yet to figure out how best to run the power feed from the relay to the boot, the battery to the relay is the easier of the runs to do as this can go through an existing grommet in the bulkhead, just from the relay to the boot I need to solve,under the carpet preferably, the ignition switching is indeed needed as I do not want to leave the radio on and drain the battery as car batteries never take kindly to being run completely dead, this is also true as I plan to have 12-volt outlets in the same place that can be used for useful accessories such as a compressor, mini-fridge or a small inverter for 240v operation, this may mean the radio may have to be mounted inside the box and therefore it will require designing with fans inside, 12-volt fans for computers do work in this environment though at 14V (alternator output) will spin a little faster however these won't be permanently powered on as a thermostat will control these (most thermostats can be set up for cooling operation and 12-volt thermostats are available), though there is a fan on the rear of the FTM-400's main unit this would be useless if the surrounding air was hot.

So with the snag above that I alluded to it could well be partly back to the drawing board.